6/18/14 – And this is where your money goes!! Our little Gilligan — He was stolen from his owner and then one year later was rescued after being thrown from a car.  Although his owner was found, she chose not to take him because she couldn’t afford the eye treatment he would need the rest of his life–she made the ultimate sacrifice for his well being.  He has since been in a loving home with two fur buddies and has just thrived.  C 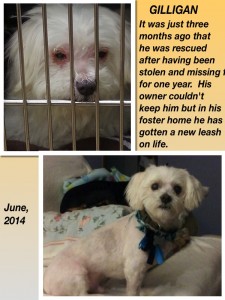 an you believe it is the same little guy?? ~ diana