8/18/14 – It was four years ago today that Gina and I started this journey having no idea where it would take us. It started with me having some money to donate to Gina’s little cat rescue at Moore’s Veterinary. I would hold family bowling parties where proceeds would go to buying headstones for long lost relatives, but this particular year, we ran out of headstones to buy. That is when I learned that Gina had moved on to the Animal Urgent and Critical Care Center and she saw how often animals would be brought in by good Samaritans who had found an injured or lone animal on the street. Although the veterinarians and staff always tried to help, they could only do so much and it is then when we thought that if we could build an organization that could pay medical bills for these abandoned and abused souls, maybe we could make a difference. That was the beginning of 4 Paws 1 Heart. Of course, we soon learned that after treating the animal, we needed help in placing the animal in a forever home and that is when we started developing relationships with our rescue partners (although Gina knew many of our rescue friends from her prior work). Friends like Loveabull Paws, Misfit Angels Rescue, A Rejoyceful Animal Rescue and NBS helped us early in the game and later we were fortunate enough to become friends with Dog Aide, Home Fur-Ever, Providing For Paws, Detroit Bully Corp, Mutts of Motown, Hopeful Heart, Tigerlily, Michigan Cat Rescue, and the Animal Adoption Network, just to name a few of the great rescues we have worked with. Then as we became more well known we started to get calls from individual good Samaritans who needed help with animals they rescued. Since we started we have paid medical bills for over 1,000 animals including the many kittens and puppies we have neutered and spayed so they will no longer reproduce.

In 2013 we paid $54,000 in medical bills and through August 15, 2014, we have paid $46,309 in medical bills. But we can’t do it alone. 4 Paws 1 Heart relies on our friends to make this happen. We can only help as long as we have money in the bank. So on our Anniversary, I’m asking all of our friends to watch our video of some of the animals we helped in 2012 (p.s. please be sure to start the video at the beginning by clicking on the screen — still learning)docs.google.com/file/d/0B5j2WG_lEZhkMFhKdmNRVGkzS28/edit and if you can afford it, drop a donation in the mail at p.o. box 84, St. Clair Shores, MI 48080 or make a donation through paypal either on the facebook link or our website 4paws1heart.org. We’ve met some great people along this ride and my life has been made better because of it. Thank You to our great Board of Directors, our supporters, our friends, and our families. ~ diana 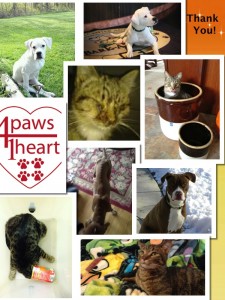 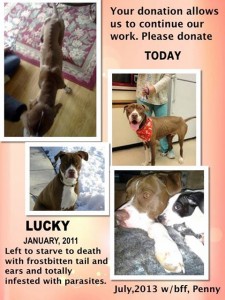 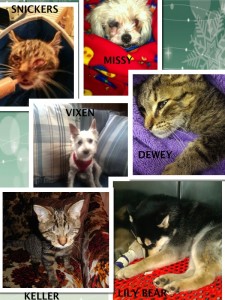 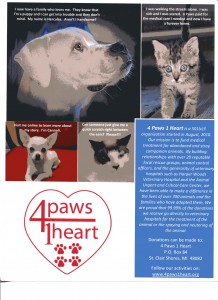