8/3/20 – Once again, it was a busy weekend. On Friday night I received a call about a cat found in the middle of Jefferson, near the spillway, in Harrison Twp., MI. The cat couldn’t move and the finder thought he might have had a broken leg. After being assured the cat could be stabilized until morning, we made arrangements to find a vet in the morning. Thankfully the doctors where our co-founder works as a vet tech, squeezed in Jefferson on Saturday morning although they were booked to the max. Here is Gina’s report:

“The doctor looked at him and we did some x rays of the pelvic area. It looks like he sustained an injury to the pelvis causing instability in his hind end. He can carefully stand and he is able to urinate in a shallow tray which is very important. He tested negative for fiv/felv. There are a few abrasions on his legs. He had some elevations in bloodwork so we are doing antibiotics, pain meds, rest, and anti-inflammatory with very close monitoring over the weekend. He might need surgery or he may heal over time. It will be day to day of making sure he will eat, drink, urinate, and have bowel movements. He is neutered and extremely gentle. He was dehydrated and anemic. He was given some fluids under the skin and treated for fleas. The man who saved him is really kind; he literally saved this cat’s life. We need more people like this in the world — unselfish and compassionate.- Gina”

His finder, Doug, will continue to look for Jefferson’s owner. If one isn’t found, he will foster him until he can find a furever home. We will continue to be committed to him just in case he needs further medical. Unfortunately, it seems that every cat we are called about these days has a severe injurty or illness. During this time of no fundraisers, your donations continue to be lifesaving. – diana
4paws1heart.org/donations/ 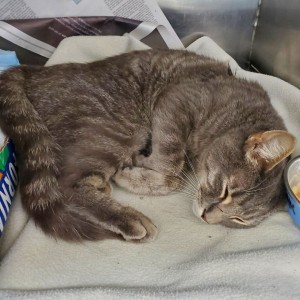 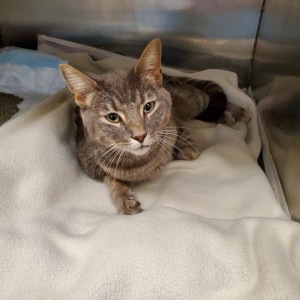