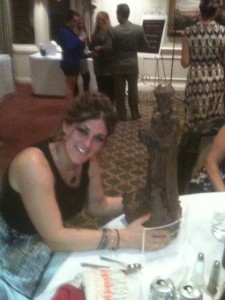 Last night Angels Supporting Animals held a fundraising event at the Lochmoor Country Club where some of the proceeds will benefit 4 Paws 1 Heart. Hercules was there for the entire evening, along with his mom and dad, Tari (Dr. Kern) and Chris. I’m sure we’ll be seeing some photos in that the everyone was taking photos of our little star. He even has his own trading card.

We also showed, for the first time ever, a new Hercules video, expertly created by Rebecca Aikins, co-founder of NBS Animal Rescue. I hope to be posting the video on YouTube later on. We even had some of Hercules’ followers from his early days on WDIV there to support us as well as Hercules’ biggest fan, Lori Jobak of 4Paws Health & Wellness.

One of the highlights of the evening was when our co-founder, Gina DeLuca, received the St. Francis award, which was given in recognition of Gina’s passion for saving all of God’s Creatures. Huge thanks to Deborah Vitale, Founder and President of Angels Supporting Animals, her Board of Directors, and all of the volunteers who made this a very special night for all. ~ diana