8/6/13 Tweety was outside when somebody’s ‘outdoor’ cat tried to attack him, but luckily he did not get killed. He has a small injury on his little leg. Since then this same woman has called 3 times about her cat going after other birds. I wish she would leave her cat inside!! Tweety the Robin is doing great, he still is pretty young to be on his own, so when he is ready to go, I will release him. As of now he is staying at the Gina Inn. ~ gina 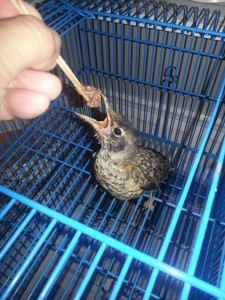 8/18/13  Tweetie says “Good Morning” — another beautiful day to be cared for by Gina. Here’s his latest report:

“Our little Robin friend who has a healed fracture on the right leg is doing very good. He spends the day outside in the sun (in his cage, of coarse) and, at night, inside protected until he is strong enough to be released. Due to his injury, he might need surgery, but I’ll know more about that in the next couple of weeks.” ~ gina