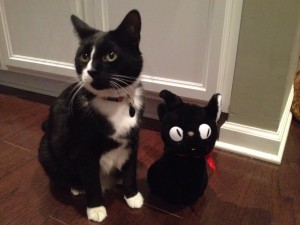 7/3/14 – HAPPY UPDATE!! Oreo was brought to us in September, 2013. He was nearly dead, emaciated and laying on the side of the road. I wanted to share his mom’s update and photo with our friends. ~ diana

“Oreo is doing great! He had a broken leg for about 6-8 weeks but it has healed. I woke up one morning to find that he wasn’t using his leg. The Vet did an Xray and found he has poor bone density most likely being malnourished while growing. (I think he was 5 lbs when you found him). She said it will improve over time. So he wore a cast for 6-8 weeks and did well with it! He’s all better now. He and our other cat Monty have bonded in an extraordinary way. They are best buddies (see pic). Oreo is such a sweet, sweet soul and LOVES to cuddle on your lap. He is 15 lbs now and a happy! Thank you for saving him! We recently moved and now he has a HUGE window to look out. He parks himself there every day. I’ll send you a picture. You’ll love it. My son asked me this morning, as a matter of fact, if I could put Oreo on his lap to cuddle when he gets home from camp. We really enjoy him. Ok enough . Ingrid”