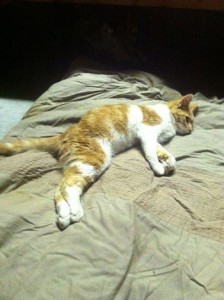 Last night she went into labor much earlier than expected. It was a long night for this sweetheart while she gave birth to 3 babies; two of whom were dead and another who was barely alive and died shortly after. The babies were still in their sac and the placenta remained in Dusty and it appears she has more babies in her. She is being taken to the hospital this morning as soon as they open. I’m not only concerned about Dusty and her babies but I’m concerned on what medical treatment she will require. I will report on her progress as it becomes known. We may need your help. Thank You! ~ diana