Prayers and Positive Energy Needed: This little guy, Dexter, was rescued by the side of the road. He had a bloody neck and a heavy chain hanging from him. He was very flea infested. His rescuers took him to the vet to be treated and attempted to find his owner without success. Within a few days he seemed to be in pain and they again took him to the vet. The x-rays showed he had bladder stones. The rescuers had already spent a considerable amount of money and still no owner stepped forward so after a week they reached out to 4 Paws 1 Heart. We agreed to help this sweet boy and this morning he will be operated on. The rescuers are committed to finding the perfect forever home (although it might be theirs). ~ diana

Update:  Dexter’s surgery was successful and he was neutered during the process. 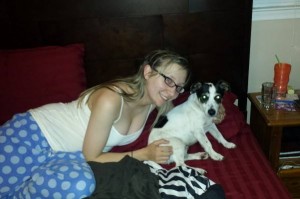