5/20/16 – A good friend of 4 Paws 1 Heart and a passionate animal advocate called me about a squirrel that often visited her backyard. The squirrel seemed to be searching for food and water and appeared totally blind and suffering. She thought her neighbor had put poison out as he tends to often threaten. She was able to catch the little guy and 4 Paws 1 Heart made arrangements for him to go to an emergency hospital. There he was found to have Squirrel Pox. Unfortunately, this is a very contagious disease and very painful. Consequently, he was humanely euthanized. We know he is in a better place, hiding nuts and playing with all of the other animals. ~ diana 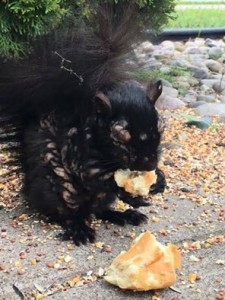