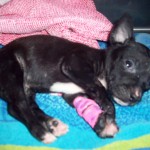 Pablo was a 6 week old puppy who was very sick probably since birth.  The family who rescued him had him for less than a day when they noticed something was very serious.  They also rescued two other pups from this home to try and save them from being taken to the shelter.  We offered them to sign Pablo over because of his serious condition.  4 paws 1 heart tried to treat, but we chose to humanely euthanize him when he continued to decline throughout the evening.  It’s what was best.  The doctor thinks he may have been born with a liver shunt.