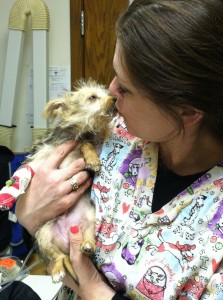 1/20/13  This is Vixen.  A 12-week old, yorkie puppy that needed surgery to save her life. Without major surgery to remove the intestines that were being strangulated inside of this puppy, she would have died in a matter of hours.  Tiny, and weighing in at only 1.05 pounds, this puppy survived the surgery two nights ago and she is recovering great! Thanks goes to Dr. Venet and LVT Dawn who literally saved this puppy’s life.  4 Paws 1 Heart, is paying for all medical care and hear is a photo of Vixen giving me kisses the day following surgery.  How something like this could have happened, we will never know because it was a rare case.  Part of her intestine had to be removed and for such a tiny puppy this was a miracle that wouldn’t have happened without our awesome staff!  I’m so lucky to have the opportunity to work with such amazing people! ~ Gina 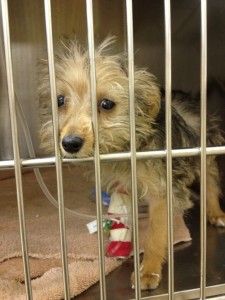 1/20/13 – Vixen’s belly is stapled closed and an IV catheter is in place to keep her stable while she heals from major abdominal surgery.  She is on IV antibiotics, pain medication, and receives several blood draws to make sure she is healing properly.  Her intestines were strangulated cutting off blood supply, not allowing function, and causing severe pain, shock, infection, and necrotic tissue.

Prayers are welcome for this sweet baby who was surrendered. ~ Gina