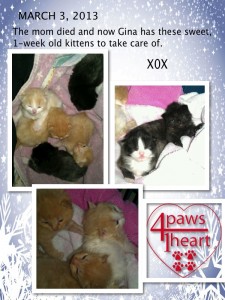 “Guess who has five 1-week old kittens??? If you guessed Gina, you guessed right.A couple brought in the mom and the five, one-week old kittens to the Emergency. The mother was severely convulsing and, unfortunately, couldn’t be saved. The family was devastated but very relieved and appreciative when Gina offered to take in the kittens. The family explained that the female was 1 year old and because of some financial hardships had not had her spayed. Then they rescued an intact male. They thought they had successfully kept them apart but the female got pregnant. The condition which caused her death was a result of the birth and could be better explained by Gina.
A hard lesson to be learned is that we MUST spay and neuter our pets. Too many pets are dying in the shelters, on the streets, or like in this case, because of medical conditions which could have been avoided. There are low-cost clinics which will spay and neuter your cat for $40 and your dog for $80 (sometimes less) Don’t let this heartache happen to you. ~ diana”
Share