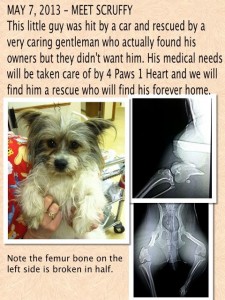 May 7, 2013 – Yesterday a senior gentleman witnessed this dog being hit by a car in Detroit. He found the owners and they verbally said they did not want the dog, and according to the elderly man nor did they show any concern for their dog. Instead, they said to the man “you want him take him”. So he took the pup home and called for help. I offered him the option to bring the dog to me and “4 paws 1 heart” would have him examined and medically cared for. Turns out the rear Femur is badly broken. We are looking into surgery options at this time. I’ll keep you updated. We are calling him Scruffy. He smells badly and he is matted and un-neutered. Doesn’t appear that he had any veterinary care. We are going to wait until his leg is assessed before we have him groomed. But, rest assured, his life will be better from here on out. Although this kind gentleman made a generous donation to 4 Paws 1 Heart, the medical bills to get this sweetheart all fixed up will be quite significant. ~ giana