October 12, 2013 – I hate to report that the little silky terrier who got into a tiff with a Mastiff did not make it. The owner was found and she picked the dog up from the vet but didn’t pay the vet bill. She also said that she had no idea someone had left the gate open and that her dog had been missing. REMINDER Don’t let your dog out without knowing the property is secured. Please always keep an eye on your pets. ~ diana 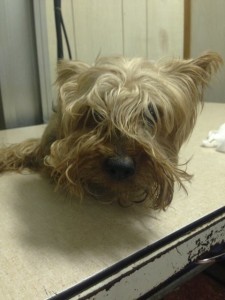 October 10, 2013 – I believe this issue is important enough to share again and to ask ALL of our friends to share it and to start taking action. As I said this is just the beginning and I’ll be sharing more of the facts and issues each week BUT in the mean time start the conversation and the campaign for change by contacting your council, your board of trustees, your mayor, any of the leaders in your community who are responsible for changing and creating ordinances. If anyone has experience in writing petitions which would hold up, I would be happy to post it for your use in going through your own neighborhoods to get signatures you can then take to your government entities. WE ARE THE PEOPLE AND WE SPEAK FOR THOSE WHO CANNOT SPEAK FOR THEMSELVES!
THIS IS THE BEGINNING: About 12 animal advocates from varying backgrounds have come together to address the needs of animals in our municipalities. The issues are many and we will be sharing them with our friends. This little guy is an example of one of the huge issues we need to address. The issue is what can Animal Control Officers do to save injured/sick animals when the City they work for will not pay the veterinary bill. The answer — the animal is taken to the County shelter where he will probably be euthanized, OR, the animal control officer takes the injured/ill animal to a veterinary hospital and personally pays for the vet bill, OR the animal control officer contacts 4 Paws 1 Heart which is a very small organization who relies strictly on donations and fundraising. This little guy (as was the recent Parvo puppies who didn’t make it) is an example of the one of the many heart-wrenching decisions
needed to be made by responsible, caring animal control officers each day

This little terrier, running loose, thought he could mess with a Bull Mastiff. He was wrong and ended up in pretty bad shape. He was rescued by the Warren Animal Control Officer who took him to a hospital and contacted 4 Paws 1 Heart. He was bleeding internally; has a dislocated elbow, and multiple bite wounds. He was made stable. Who should pay for this little guy — he has no i.d. — without 4 Paws 1 Heart there would be no options other than letting him be held in the shelter without medical treatment (or being euthanized) because of hold laws. What do you think cities should do??? As a taxpayer are you willing to pay? The silent majority needs to start educating themselves and then their government and fight for change. Let the conversations begin!! ~ diana