9/22/14 – As I mentioned earlier, because Joy will not be ready for surgery for at least a couple of months, donations will be put aside. Thus far over $3,000 has been spent which doesn’t include her medications, so we will continue to seek funds and help when the time comes. In the mean time, we have still set aside money to help the others who need us. This little sweetheart is one of them. A friend of a friend contacted us about 3 kittens she had almost injured when weed-whacking on some property. These little ones were curled in a ball in a small hole. One of the cats appeared to have an upper respiratory infection and the two others appeared to be in pretty good condition. Homes were immediately found for two of the kittens including the one with the uri (who was immediately taken to the doctor), and Kim M, the rescuer, kept one baby (black and white cutie) and also brought her in to be vetted the same day, compliments of 4 Paws 1 Heart. We continue to be inspired by all of the good samaritans who take responsibility for these beautiful creatures. ~ diana 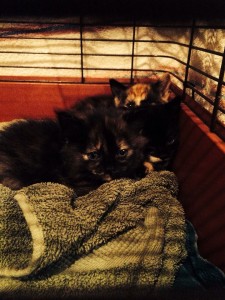 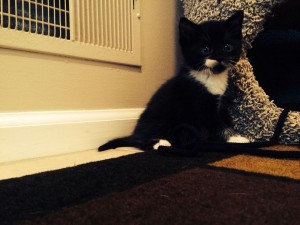 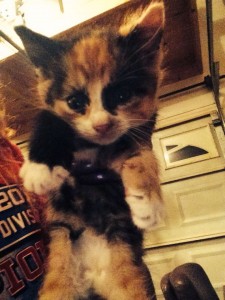