9/8/14 Prayers and Potential Rescue Needed – This sweet boy, mastiff mix, about 6 – 7 weeks old was brought in to the emergency last night by his owners. They ‘adopted’ him from a backyard breeder. They brought him in to be euthanized because he was very, very sick. They were aware that one of his litter mates had already died of the parvovirus. They brought him in to be euthanized but they didn’t have the money to pay for euthanizing. The hospital staff thought 4 Paws 1 Heart may want to save him. We did and he was surrendered to us. Gina will report later tonight how he is doing. If this little guy makes it, we will need a rescue to take him in. Thank You for keeping him in your prayers. ~ diana

9/9/14 – Update on our Mastiff Mix Puppy – No news from Gina is good news so I’m assuming this little guy is fighting the fight. I will know more later this afternoon. For now, I want to report that if if he recovers either Dr. Maria will adopt him or our great friends at A Rejoyceful Animal Rescue will take him in. Thanks for all of the prayers! ~ diana 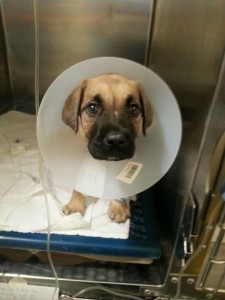 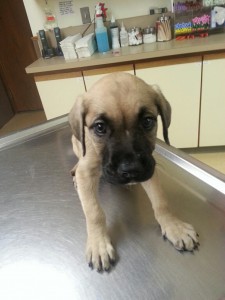