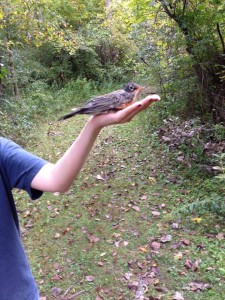 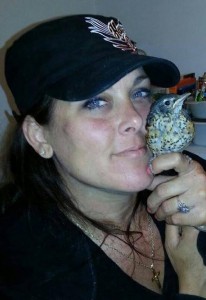 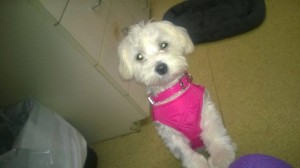 9/23/14 What A Beautiful Fall Day It’s Been — Very Deserving of these two wonderful updates from Gina:
“The little Robin I took in about almost 2 years ago was finally released this weekend. He was originally brought to me after falling out of a nest following a bad storm, a cat had gotten to his leg, and the rest of the baby birds in the nest, unfortunately, did not survive.
I had no intentions of keeping this bird for as long as I did and I contacted several licensed wildlife rehabilitation experts, and I was basically told he would probably be humanely euthanized which was warranted if his leg couldn’t be fixed, BUT, it was fixed by Dr. Amy Maskey who took over his care for the last year.
She did surgery and straightened out the leg allowing the robin to be able to perch again. It took a long time and many ups and downs, but this bird was a survivor! Dr. Maskey released him over the weekend and I’m so happy we saved him!
Princess (aka Madeline), is doing great after we treated her for the Parvo Virus and she is expected to go to her new home Sunday morning! Dr. Rivera has been fostering Princess and spoiling her while we were giving her time to recover. She went shopping with the little Princess today and bought her a DIVA collar and a hot pink jacket. Thank You again to all of our supporters who enable us to give these precious creatures a second chance in life. ~ Gina