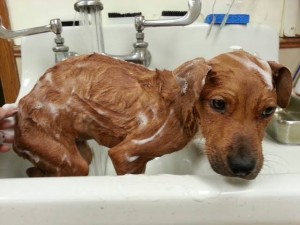 Good Morning Friends – Many of our friends have asked whether we have contacted the authorities about Katniss or if anyone is investigating her abuse. I thought that I would share my own personal response to those questions in hopes that those of you who have been moved by Katniss’ story will become inspired to act. And because my opinion is harsh, I have included a photo of Katniss’ first bath. ~ diana

“The answer to those questions is ‘no’. The reasons are many and none of them are really good but unfortunately it is reality. Animals are considered property and although the State has some strong cruelty laws, enforcement is less than adequate. If you take incidents like Katniss where she was found in a City where child shootings, robberies, and murders are ordinary activities of the day, the police and prosecutors have very little time to respond or investigate individual cases like this. Also, where would one start? The curb she was found at was in front of a vacant home in a neighborhood where most homes were either vacant or gone. Having said that, enforcement of animal cruelty laws in most communities is pretty much non-existent. Dog fighting rings are in every community and for some reason, you rarely hear anything about raids or shutting them down. There are puppy mills who blatantly operate in the open with females producing litter after litter stuffed in cages for their entire reproducing life and then dumped on the streets or left to die and yet very little is done to shut them down. An alleged rescue was found with over 100 dead cats and others in various stages of death and yet she is not in jail nor has she even been prosecuted and she is allegedly back to rescuing. And, to me, even more heinous is the fact that law enforcement continues to turn their backs to pest control companies who are trapping cats and killing them, even though it is against the law. And, even worse, to me are those cities like Sterling Heights, Eastpointe, Roseville, and many others, who are ‘legally’ killing stray cats by taking them to kill shelters or places like the Animal Care Hospital of Sterling Heights where the cities pay to have the cats killed. Sorry to get on my soap box but how can anyone take our cruelty laws seriously when all of this is going on. People who care really do need to get involved, get educated, and start truly being the ‘voice of the voiceless’.” ~ diana