UPDATE 5/31/17: I had been waiting to post this until I heard back from his caretaker, who had promised to get back to me with an update and photos. Because of this posting, someone very much involved in this case, contacted me to say she had also been trying to get an update on Tico. Later in the day, she contacted me to report that Tico had passed away although it does not appear it was because of these injuries. I also learned that the person who called me frantically crying had actually lied about the situation. He had allowed a person into his home with two alleged pitbulls. This goes under the saying that “no good deed goes unpunished” RIP Sweet Tico. The humans let you down. ~ diana 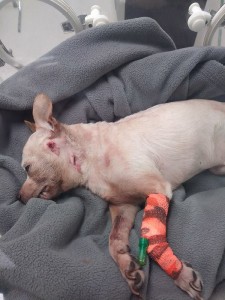 5/30/17 – Tico was attacked by a stray dog as he was being walked by his caretaker. 4 Paws 1 Heart was happy to pay for Tico’s veterinarian visit where he was treated for wounds. According to the veterinarian he was doing well and was released. ~ diana