1/20/18 – Prayers for Jack . It was just last week-end that we posted an update of our little one-eyed guy, Jack, with his ‘brother’, Toby. Shortly after I heard from the family. Jack has a virus call calicivirus, ulcers on his tongue and severe respiratory symptoms. His ‘good’ eye is swollen and he’s been licking his nose — making it raw to the point of profuse bleeding. Jack is one of those few animals that 4 Paws 1 Heart has committed to helping. He holds a special place in my heart because of what he must have gone through before he found Kelly and Dave. Jack has been treated with fluids and antibiotics and, although still ill, is being babied and much loved at home. – Diana . (p.s. Jack is on the left) 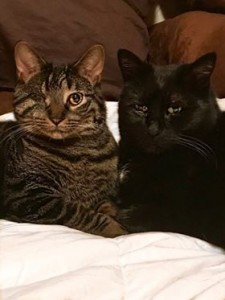