Update July 22, 2012
These two kittens died yesterday morning. They were very sick and dehydrated. We are caring for the mom who is currently hospitalized. She was dehydrated as a result of a virus. 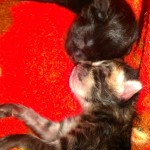 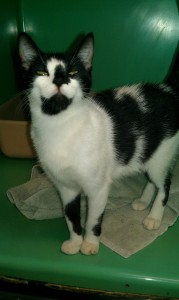 This is Viva. She was rescued by Warren Animal Control Officers Lisa and Kim. We shared her story earlier — she was found on the porch severely dehydrated having just given birth to 4 kittens. Two were laying there dead and 2 were near death. Viva was so young (7 months) and so severely dehydrated she couldn’t produce enough milk to feed her living kittens. The three were brought into Emergency where the remaining two kittens died. The mom, Viva, is still hospitalized by recovering. She is very sweet and affectionate.