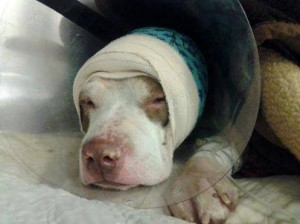 12/22/13 TINY TIM was used as a bait dog and taken in by Providing For Paws. Once again, because of our generous supporters, we will be sending medical dollars for the care of Tiny Tim. Thank you to our friends, the Union Hall members, River Rouge Shelter, and Providing for Paws for giving this poor abused dog a second chance. Here is his story as taken from Providing For Paws’ facebook page.

“Update 12-20-13 Tiny Tim had his surgery in the early hours this morning. He was missing a lot of cartilage on one of his ears, however our wonderful Dr. Reuland was able to put it all back together again. She said it might not hang exactly right, but she was able to repair that ear and suture up the second ear that was not in as bad of shape. She believes he also has a ruptured ear drum, after looking down his ear canal with the scope. He has frost bit face, testicles, and some areas of his paws. Some layers of skin from being frost bit, are peeling off those areas. He also need some repair on his right leg. He is so exhausted still! We got him up and outside to go potty and he could only take a step or two, before he would stop again to rest. Once back in the hospital, he was back in his crate to rest. Such a very sweet and loving boy he is. Heart breaking to see him so weak.