2/3/15 – ANOTHER EMERGENCY – A call was just received about a dog stuck inside fencing and still alive. It’s the Downtown area. The lady said the dog could have been there for days. We contacted Misfit Angels Rescue and they immediately offered to rescue and transport the dog to us. We are willing to provide funding for medical for either of these cases. I will update once I know more. Gina

2/3/15 – Update on Emergency #2 tonight. This old man was found out in the cold in Detroit. The caller thought he was stuck in a fence, but he was burrowed against a tree surrounded by snow. He was transported to the ER Hospital by Misfit Angels Rescue. Thank you so much for immediately taking action, this guy wouldn’t have made it without you! We feel he got lost from his home, and we hope to find his family. Our main concern is the foreign body showing up in his stomach on x ray. We have him stabilized on fluids and antibiotics. He’s probably 10+, male, not neutered 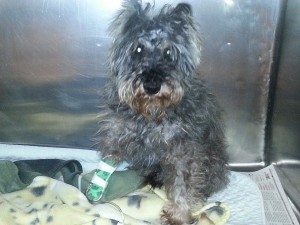 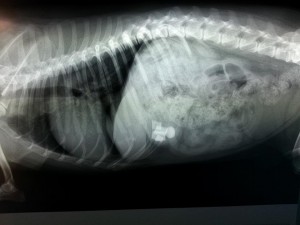