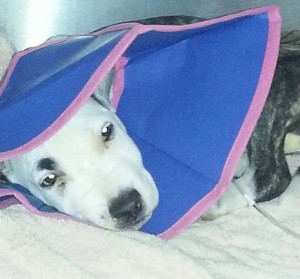 Rest in peace sweet puppy….
This puppy was adopted off of Craig’s List 8 weeks ago. He became Jaundice, then started vomiting and having diarrhea over a 3 day period. His family couldn’t provide treatment, but they were willing to surrender him to give him a chance. We agreed to pay for his medical care, but it was just too late. He was in acute kidney failure and he wasn’t responding to the aggressive treatment. Today, after the doctor assesed him, I made the decision to humanely euthanize. He was suffering, and he was not going to get better. I hate to post these stories, but it seems that even with awareness people don’t learn! A $25 vaccine might have prevented this! We don’t know if it was Lepto or from some other cause. What we do know is this puppy was yellow for 3 days before being seen by a veterinarian. He was never given any vaccines. He was “regularly” eating things in the home like dirty diapers. This is a death that could have been prevented! Do not get a puppy if you can not afford to take care of them because people like me and the veterinary staff have to see them die and it SUCKS! Gina