5/8/15 – It is always great to hear happy updates from those we’ve assisted. Sherlock basically adopted the family by going in and out of their ‘doggie’ door. He was limping and had two puncture wounds in his leg which was swollen. His jaw and tooth also appeared damaged. Prior to being rescued, Sherlock had been picked up by animal control, neutered, ear tipped, and placed back where he was found.

“We are so thankful for the families who will take in abandoned animals, like Sherlock, and give them loving homes. ~ diana

It will be 1 year Memorial weekend since Sherlock (right) adopted our family.. He and Tiger has become great friends.. He is the best present (stray).. I’m so glad he picked our home to be his forever home.. Thank you to 4 paws for his medical a year ago.. He is healthy and safe now… Joanie” 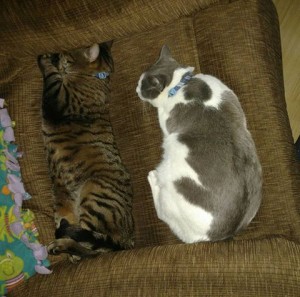