2/2/17 – It was one year ago today that I posted the following story. We all wish we could have had him in our lives longer but I know without doubt that he was much loved and would not have had an extra year had it not been for your donations and the love of this foster mom and aunt. RIP Sweet Boy. Please say hi to my babies for me. xox Aunt Di

This is Mr. C. Although we didn’t know much at the time we got involved, this very sweet boy had some real challenges. We don’t want to go into too much detail because of the manner in which 4 Paws 1 Heart became his savior but let me just say, the hospital staff fell in love with him and we had to give him a chance. The information we eventually received indicated that when Mr. C was a kitten, he had a tumor that needed removal and it resulted in most of his tail being amputated. Fast forward 5 to 6 years later, and once again, a tumor developed and went unnoticed until it burst. At that point, Mr. C was very much in danger and, once again, needed almost immediate surgery. After three days of being held in a hospital waiting while money could be raised for his operation, we were called in to help. On the fourth day, Mr. C’s burst tumor was removed and the remaining stump of his tail was amputated. He went to a great foster home the next day for recovery. Thankfully, his foster mom has had a great deal of experience with recovering animals and within a couple of days noticed that Mr. C was not moving his bowels. Mr. C again had to be returned to the hospital where it was determined that he was blocked. Again, a very dangerous situation for a little guy which resulted in another overnight stay in the hospital. Mr. C is now doing well. He is warming up to the foster house and is starting to heal. We still do not know anything about the tumor but we should get results this week. Once again, it was the work and donations of a village which saved this sweet guy’s life. He will one day need a forever home who can make sure he will never be in this position again. Remember, when you take on the responsibility of a life, it comes with a commitment to provide food, shelter, love, and medical treatment. ~ diana” 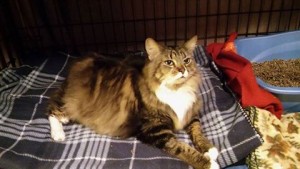