5/31/17 – It was the evening of Memorial Day when I received a call regarding this mom who was found in a garage with 3 newborn kittens. According to the rescuer ” everyone looked healthy yesterday. Mama was eating, drinking, and taking care of the babies; the babies were nursing and gaining weight. Around 6pm today, one of my kids said mama was hot and breathing heavy. I went and checked on her and she was panting tongue, hanging out and rapid breathing. I put a fan in the room in case she was hot. I took the babies for a little while to try and let her rest. But I’m worried.”

Because we were afraid that another baby might have been stuck in the birth canal, Mama and babies were taken to the emergency hospital where x rays and blood work were completed. It was determined that Mama had an inordinate amount of feces in her, and fortunately, there were no other kittens. Mama was treated and released. Later, Mama finally had a bowel movement and was resting comfortably as of yesterday. 4 Paws 1 Heart will be on standby should Mama need more medical care. ~ diana 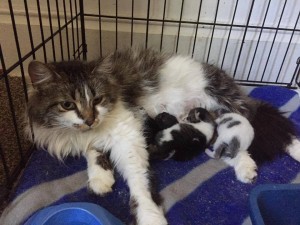