6/30/17 – It was the night of the Detroit Fireworks when I received a call from one of the independent rescuers we often assist. A dog had been hit by a car earlier in the day and it appeared the legs were broken. I authorized the dog to be taken to the emergency and, finally, at about midnight, this very injured dog was seen by the doctor where it was determined that the pelvis was broken, there was severe trauma to the head, and other injuries. The doctor decided humane euthanasia was the best for this poor soul. Rest In Peace sweet one. We wish we could have done more. ~ diana 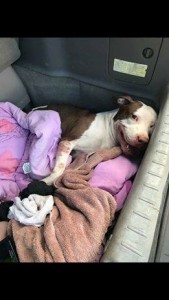