6/28/17 – I’ve said it before and I will say it again — we couldn’t accomplish what we have (over $512,000 in medical payments for over 4,000 animals) without our friends. I want to recognize Yuki Canoy who had met us at a fundraiser being hosted by a another 4p1h friend. Yuki raised over $1,800 in donations by Running For A Cause. Without our friends we could not help the abandoned and abused like Lucky. We received a call from Kelly Hook who happened to be on the scene of a cat being hit by a car. The cat was huddled along the side of a building. She got him in the car and immediately called us. Although he was not bleeding or showing external signs of injury, we had Lucky go to the emergency hospital. Upon examination, Lucky appeared to have no injuries but it was found that his poor little paws were badly damaged from a life on the streets. His paws were treated with antibiotics and wrapped to hasten healing. Lucky is now with our good friends at A Hopeful Heart Rescue and if you are interested in Lucky, please contact them. ~ diana 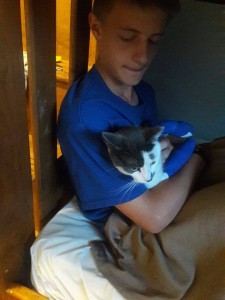