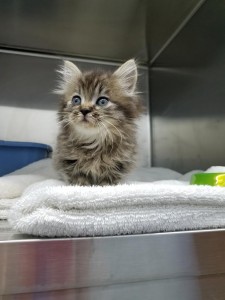 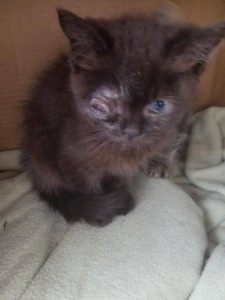 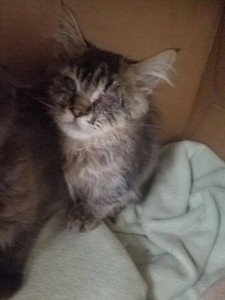 6/6/18 UPDATE; Coco and Pepper were seen by the vet on Monday. The vet determined that Coco, even though she only weighs 1 lb. 9 oz., needed to have surgery asap. It was scheduled for Tuesday and Coco was kept over night. Pepper was examined and may require the same surger; he weighs 3.2 lbs. Both received their first vaccine. Yesterday, Coco made it through surgery but Pepper took a turn for the worse (may be the vaccine) and was taken to the vet when Coco was being picked up. I am waiting for another update. Thank you for all of the prayers. ~ diana

6/4/18 Please pray for these sweet kittens. They were all surrendered to Gina at the veterinary she works at. They were all found on the street with severe upper respiratory infections. Two of the kittens (Coco and Pepper) will need one eye removed. The other kitten, Foxy, has been struggling to survive with Gina but may have turned the corner. Coco and Pepper will be seeing the vet today. My heart breaks for all of the animals on the streets that may be struggling like these three with no one to care for them. Please say a prayer and send some positive energy. Here is Foxy, Coco, and Pepper. I did not include the horrific photo of Coco’s eye as it looks now. ~ diana