11/21/18 – Everything happens for a reason. So, one afternoon I was at work walking past a dog that I noticed was in a fetal position and shaking uncontrollably. Not knowing his temperament, I slowly opened his cage door and sat on the ground beside him. He would not make eye contact with me nor could he take a deep breath because he was shivering so rapidly. I talked to him for a while and a few days later learned that he was found running the streets and brought in by animal control with chains on his neck. No one claimed him during his stray hold and his fate was grave based on his look, his fear, and his breed. I reached out to take him into 4 paws 1 heart, but had no idea what I was going to do with him because we are not a rescue.. Fortunately, one of my co-workers was willing to foster him and give him the opportunity to receive love and confidence. He was skin and bones and covered in scabs. Fast forward 2 months. His name is Bubba and he is now in the best home I could possibly ask for. It was love at first sight when this family saw him on social media. He is happy, loved, comfortable, and words cannot describe how much I love this dog and this happy ending. Bubba has a kitty brother that grooms him and stays by his side. They perch on the couch and look out the window together, they hang out and look out the front door, the kitty groom’s him and gives him a little love bites, and the couple said that Bubba is “Everything they wanted in a dog and then some”. Here are some before pics and seriously take a good look at the before collage, and then look at the after pics. These Pics speak a million words. Bubba. Gina ♡ 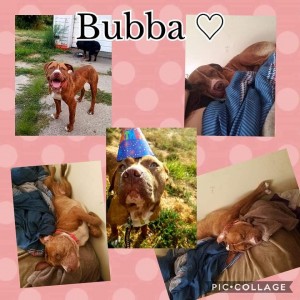 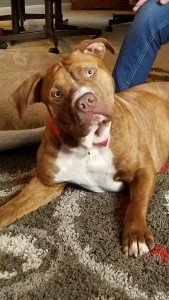 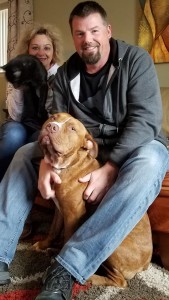