2/27/19 – Smokey was rescued last year — he was only 4 weeks old. I’ve waited to post him because I wanted to know how he was doing today. When Smokey was rescued he was taken to the emergency vet because he was having seizures. Smokey was found to have low blood sugar and a very low body temperature. He was treated and sent home with instructions to follow up with further tests. That is when we were called.
We made arrangements for Smokey to be seen and tests were donealthough it could not be determined what caused the drop in the blood sugar. The doctor thought that Smokey might not have been able to ‘fight’ his siblings for food and was not able to get enough nutrients. He received more treatment and although he had another seizure the next day, Smokey was responsive and walking. In that I had not heard back from the rescuer for a few months, I followed up with the finder. It took a little while but I finally learned that Smokey is doing good although still very small. Smokey is being loved and well cared for. ~ diana
4paws1heart.org/donations/ 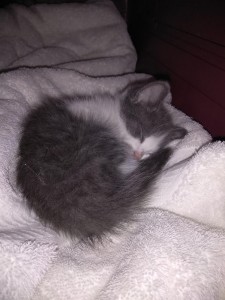