3/28/19 – Meet Louie. We think he will be officially adopted this weekend! His back story is that while a great rescue friend was at the Humane Society with Samson, another rescue, Louie was being brought in and surrendered by his owner’s family. The owner fell while she was walking him and could no longer keep him. She had adopted him only 3 weeks prior when he was surrendered to the Monroe MHS. Louie had been badly neglected by his original owner and was covered in matted fur, overgrown toenails that caused sores on his paw pads, and he has severe separation anxiety due to being left in a crate for up to 18 hours a day. His recent owner loved him dearly and cried so hard when she had to give him up, but she is older and cannot keep him as she will be in a rehab center for many months. The family surrendered Louie to our friend, Shayla, and she promised to find him the perfect home! We were happy to help with his medical needs. ~ diana
4paws1heart.org/donations/ 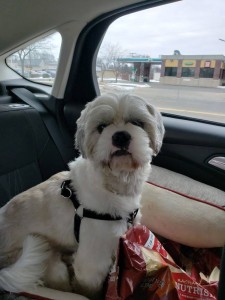