Skip to primary content
4/3/21 – Buddy had been roaming the neighborhood for awhile. The neighbors said that he had been TNR’d along with his mother a “couple of years” ago. A kind woman, who has been feeding him, said that his ear appeared to be tipped and noticed that he recently started limping and appeared to not be putting weight on his one leg. She has never been able to get within 5 feet of him but will come when she calls him for dinner. We authorized Buddy to be taken to one of our partner vets and here is the update:
“Hi Diana,
I wanted to Thank you again and give you an update on Buddy. Turns out the 3rd digit on his hind leg was folded back and stuck in the bottom of his paw and infected. So they took care of that and also neutered him. Apparently the neighbors were wrong. I will be keeping in my utility room until he is finished with his meds. They said his paw needs to stay clean, otherwise I would just give him meds in his food outside everyday. I am attaching a pic. The vet said he was an old man as he was missing a few teeth and has had his share of fights. He seemed to think he was looking for help when I described some of his comings and goings. Buddy and I Thank you sooo much. Please let me know if there is anything I can do for you! God bless you for being the angel that you are!

– Linda”
All animals are important and should never have to endure pain. May God bless those who never turn their backs on an animal in need. – diana
4paws1heart.org/donations/
“Be kind to all pets and animals because they will be kind back to you.” – Wesley Porter 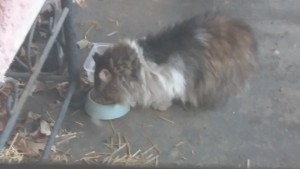 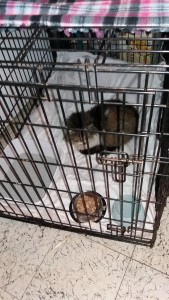