Skip to primary content
4/5/21 – After a beautiful Easter Sunday, I thought I would start your week with an uplifting story. This is Lewis. A young puppy recently adopted by a very kind family.
Last week, our good friend and animal whisperer, Debra Berolatti, was returning from helping an elderly woman who had reached out to us for assistance in trapping and medical. She was driving by the Selfridge Air National Guard base and a nearby junkyard where she has seen and helped cats congregating there. As she was driving she saw what she thought was a large black cat, near a ditch, trying to get under the barb-wired fence. She put her flashers on and stopped and found the animal was actually a puppy. Traffic was stopped, Debra got a leash out of her car, and cautiously approached the beautiful puppy wearing a bandana, a collar, and tags. The puppy smelled of sewage but he rolled over on his back and Debra picked him up and put him in her car. She brought him to one of our partner veterinary hospitals, Patterson Veterinary Hospital. The staff found a microchip which enabled Lewis to be reunited with his tearful owner. The owner said she had been frantically looking for Lewis who had obviously snuck out during a delivery at a shop she worked at. The mom tried insisting that Debra take a reward for finding their new baby but Debra insisted a donation be made to 4 Paws 1 Heart so that others who have no loving owners could be saved. And that is what the mom did. She sent a beautiful letter and a very generous donation. – diana
4paws1heart.org/donations/
“There is no psychiatrist in the world like a puppy licking your face” – Bernard Williams 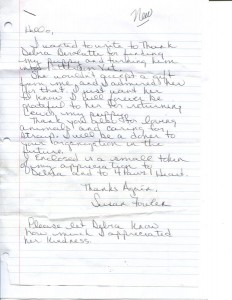