Skip to primary content
6/7/21 – Frankie was rescued from a cat community. He was in a great deal of pain and was diagnosed with stomatitis. Last week he had his follow up appointment and had all of his teeth except his canines extracted. For the first couple of days after the surgery, Frankie was acted “down in the dumps” and not too interested in eating (no surprise). But after finishing his pain meds and finally eating some baby food, he began to act like a kitty again and is doing well. The rescuer is beyond herself with appreciation. Anyone interested in Frankie should contact Tina at: tinsprin93@gmail.com – diana
4paws1heart.org/donations/ 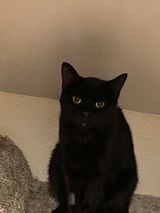