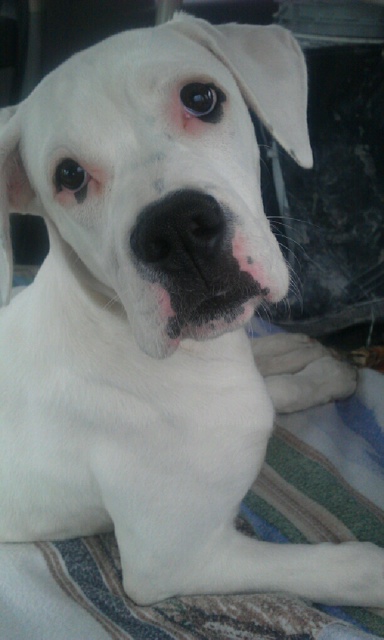 Puppy is permanently disfigured  by owner in Eastpointe.  Now help is needed for specialty care..

On the day of May 8th 2012 Hercules’ owner pleaded guilty to the animal cruelty charge and he was given a misdemeanor with one year non- reporting probation as his penalty and no ownership of another dog allowed for 1 year within the city of Eastpointe.

Hercules is a 5 month old white boxer puppy.  He has suffered weeks of pain and neglect at the hands of his owner who broke both back legs in three different areas.  His femurs were broken directly above the knees and his left Tibia (below the knee) was broken.  Reason per owner is because he got into the garbage can, but three different stories were given in court as to how the breaks happened. 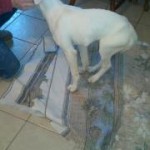 It all started when an Eastpointe resident saw Hercules in front of his home, and not able to walk.  She called authorities who then required the owner to seek medical attention for his puppy.  The owner was forced to take Hercules to the veterinarian, but he declined all medical recommendations.  No treatment, no diagnostics, and no humane euthanasia was initiated for a suffering disfigured puppy, so he walked out of the vet. free and clear.  Not only was Hercules  broken, but he was starved with every bone in his body sticking out. 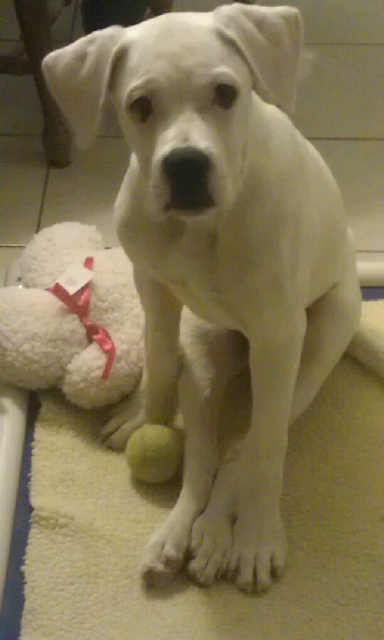 Thanks to the compassion and determination of the animal control officer Matt, Hercules was taken from the home the next day.  He was then given to “4 paws 1 heart” a nonprofit organization where he received immediate medical attention through our doctors.  Based on diagnostics the injuries occurred about 2 months ago.  Meanwhile, this puppy has been compensating by weight bearing only on his front legs.  He hobbles to get around, lifts his back feet off the ground, and carries his weight mainly on the front end of his body.  According to our doctor injuries such as these are primarily caused by extreme blunt force.

According to our Veterinarian, “Some examples of this trauma include being hit by a car, beaten with a bat, or kicked with the intent to cause bodily harm.  The dogs pain and emotional discomfort would have been immediately evident, and medical treatment was never sought by the owner”.

24 hours after the court hearing it was discovered that the injuries on Hercules might be inoperable due to the  new bone formation as a result of the leg’s being broken for so long. 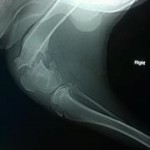 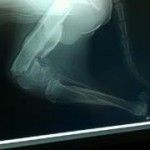 You would never know that Hercules is in pain because since he has been with us he has received nothing but love and safety.  He gives face washes with his kisses, plays with his toy’s, loves his new bed, chews on his dog bones, loves car rides, and  wags his tail nonstop. He has since received nothing but love.  I want him to know there will be no more suffering, pain, neglect, or torture at the hands of a human for the rest of his life.

We need help to fix Hercules and our next step is to see an orthopedic specialist for a consultation.  4 Paws 1 Heart is a nonprofit organization that pays for medical care to injured  animals.  We are not in a financial position to afford a $5-$10,000 dollar surgery, so we are asking for help for Hercules.  This is the worst case of animal cruelty that I’ve seen in 10 years.

I’m asking that we get the awareness out there to immediately report animal cruelty when you suspect it, pursue it within your city, and support changing laws to protect these animals that have hardly any rights, or value within the legal system.  Hercules’ owner got a misdemeanor equivalent to a parking ticket for breaking his puppy’s legs, permanently disfiguring him, starving him, and neglecting him.  What if this was a child?  Would it matter then?  This is wrong, inhumane, and barbaric.  If the community doesn’t help out then things will never change.

Hercules is finally in a safe place and he is a bundle of love.  We just don’t want him to be in pain or ever suffer again.

7 comments on “The Story of Hercules”