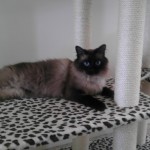 HERO CAT: This is Kali a 2-year-old Balinese female that came into Cats Veterinary as a stray after being attacked by hunting dogs. 4 Paws 1 Heart Board member, Sasha Oza, was there to save her and give her a forever home. About 6 weeks ago a 2 and 1/2 week old kitten (Athena) was brought in by a woman who found her all alone in her garden. 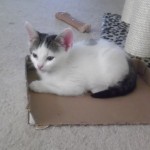 Sasha took over her care but Athena’s health was very touch and go. Sasha didn’t think she was going to make it. Athena ‘crashed’ twice and almost died. One night while Sasha was sleeping, Kali alerted Sasha. Sasha got up to check Athena and found her limp and lifeless. Sasha rushed her to the E.R. where they put in an IV catheter. Athena then required meds and fluids every hour. If Kali hadn’t woken up Sasha when she did, it would have been too late for Athena. Athena is now doing fantastic! She’s a silly kitten that loves to play with my dog, and Kali. Who says that only dogs can be heroes! ~ diana