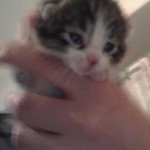 CAT HERO KALI (part II) This baby was brought in on Sunday to the E.R. Again, Sasha was on duty. A man almost ran over the kitten with a lawn mower. Luckily, she’s a loud screamer and the man heard her and brought her in. She is about 1-1/2-2 weeks old. Sasha took her home to once again care for her. Her eyes just opened this morning. As with all kittens lacking a mom, this one needed to be fed and pottied every few hours. The last couple of nights, for some reason, Sasha’s alarm did not go off in the middle of the night so that Sasha could get up and feed the baby. But both nights Kali made sure Sasha woke up by ramming her head into Sasha like a bull and pulling the covers off of her. The little one is doing great and is now named Butternut. Did you ever hear of a therapy cat? ~ diana