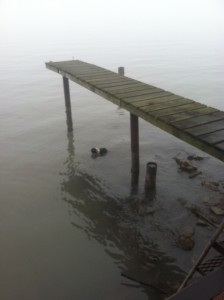 12/3/12 A Life Saved: This is Cookie. Our neighbor was in his yard cleaning and saw a dog in Lake St. Clair standing on the rocks about 10 feet from our Seawall. He immediately contacted Tony (my husband)  and I needing help. I called the police but was told that the Animal Control Officer in St. Clair Shores is not allowed to go in the water nor are the police. The options were the Coast Guard (the dog would have possibly frozen and drowned before they could get to him) or Tony.  So, Tony went in. Here you see Cookie bundled in a blanket shaking like a leaf.  We were worried that she might go into shock.  When Tony went in the water, Cookie was like a statue standing still with the waves rolling over her legs. 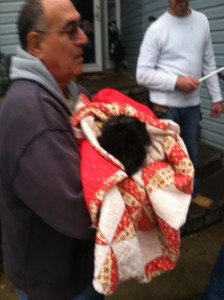 Tony wrapped her in a blanket and handed her over to Philip was to go with me to the vet while Tony got out of his wet clothes.

Philip and I went to the VCA Veterinary where the staff quickly took in Cookie. There was no microchip but there was a collar with a tag having a phone number and address. Philip left 2 messages for the owner and the vet left one. Cookie is now staying with the vet for observation. 4 Paws 1 Heart has guaranteed the vet bill if it’s necessary and Philip will house the little sweetheart while we await the owner’s call. If the owner doesn’t come through, we will need help from our rescue friends. Cookie looks like a little Yorkie/ShiTsu (?) ~ diana 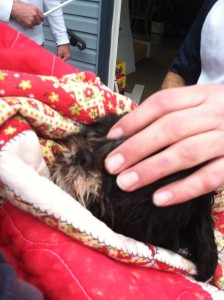 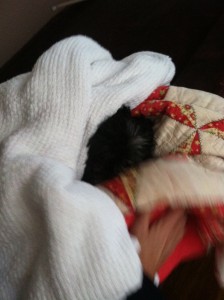 12/4/12: I just called VCA and the person who answered said Cookie was not there this morning so the owner must have picked her up. I asked if she could check with the staff who was on duty last night so that I could be assured as to who picked her up. She is to call me back and I’ll report on it. We will continue to follow up. ~ diana

When I returned from the vet’s office yesterday and was reporting on the incident, Tony said he would like to take a drive by the owner’s house to see if anyone was there. I got the address and owner’s name and Tony left. Here’s the twist — the owner turns out to be the neighbor who used to help my grandparents when they lived next door to her. When my grandfather could no longer drive, she would help out by taking him to the grocery story and basically would watch out for them. We were all working in those days and it was nice to have her there when we weren’t around. My grandpa died in 1990 (at 90 years old) and my grandma moved out right afterward.

Tony went up to the house and there was a huge sign about a lost dog. She had been missing for FIVE days. God only knows where this poor little thing had been and, how she got into the lake, is still a puzzlement to us. But, no one was home. Tony ended up finding a neighbor (Fred) working in his garage who confirmed that Cookie indeed belonged to the woman. Fred told Tony that she normally got home around 6 p.m. and he would make sure she was given the information about Cookie. Tony left our name and number with Fred.

I have to admit that I wasn’t quite sure how to feel about this. My first reaction was like so many of your reactions. How did this little girl get out and wander to the point where she was almost frozen and dead in the lake. There is no doubt that she was in or near shock when Tony got to her. Then I thought, well at least she had a tag on with all of the owner’s information and I really didn’t know how much was done to find the dog. And, the owner was good to my grandparents and gave us peace of mind when we weren’t around. I also knew that this person had not had an easy life. So, on our way to the fundraiser, we stopped and paid the vet bill.

As I thought about this incident I couldn’t help but think my grandfather had something to do with all of this. We were very close and there aren’t many days when I don’t think of him. Could he have directed this little one to our house so that we could save her and get her to her owner?? I don’t know but stranger things have happened. What do you think? ~ diana