5/21/13  This poor little girl dog was hit by car on 8 Mile Road near Mound this morning and found lying in an alley by one of Warrens finest. 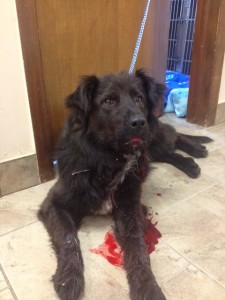 She was taken to Hoover Animal Hospital, where it was determined that she has a jaw fracture and a dislocated rear leg. 4 Paws 1 Heart offered to help with funding medical treatment but the Hospital felt they didn’t have the expertise. Consequently, 4 Paws 1 Heart paid for the initial examination and medications to keep Lola (our name) comfortable through the night.

Through our networking, transportation was found with the daughter of the the police officer who found Lola: Lisa Taylor, the animal control officer who refused to let her die, found a veterinarian with a rescue organization who will take her in and pay for her recovery costs, find her a foster and a forever home; and 4 Paws 1 Heart found medical backing through a very kind Animal Angel who has made arrangements for Lola to be seen by a specialist. At 1:24 p.m. this afternoon Lola was taken to the hospital. We will report any updates. Please remember that none of this could be done without donations from our friends. Thank You ~ diana

5/23/13  Lola Update: She’s in surgery now. They will call me when she’s out. Please keep your prayers and positive energy going her way. She’s having a lot done but you know that I will let you know when I hear something. Thanks! ~ diana 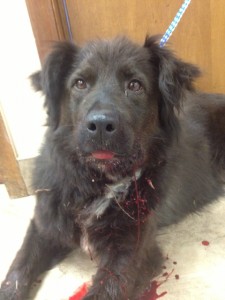 5/24/13  Quick Lola Update: I spoke with Lola’s surgeon last night. Lola was recovery well after surgery which was extensive. Lola’s jaw had been broken into 10 pieces plus she had a broken tooth. She also required hip surgery because her hip would not stay in place. She also had several wounds on her body. The doctor believes she had been hit by a car at least one week ago. Only God knows the suffering this little girl must have been through.I’ll be talking to the doctor who will be covering her road to recovery and again we thank the police officer who rescued Lola, the animal control officer, Lisa, who contacted us, and Jessica (the police officer’s daughter) who transported Lola to the hospital. ~ diana
5/25/13 LOLA UPDATE: I talked to Nancy who is the person responsible for the rescue at Parkway Hospital yesterday and she was preparing for Lola. Today I again talked with Dr. Hewitt. She was very excited to report that Lola is doing just wonderful. Her wounds are healing nicely and one of the drainage tubes was removed. She is being hand fed as a precautionary measure but is eating well. Everyone at the hospital just loves her. She will be staying at the hospital until Tuesday so that she can be watched 24/7 and then move to Parkway Veterinary on Tuesday. I will be visiting her next week and bringing her a present. I’ll be sure to take some photos. ~ diana
5/29/13  Update on Lola:   The bright spot of the day is that I did go to the Every Animal Rescue League which is the rescue sponsored by Parkway Hospital in Clinton Twp. I wanted to meet Lola and give her a new bed pillow. Well, I didn’t get to meet Lola; the manager told me that a veterinary technician in the emergency area of OVRS offered to foster her while EARL tried to find her a forever home. I was actually thrilled because the vet tech knows exactly what Lola needs and will keep Lola in her sight 24/7. I was disappointed in not meeting her but I will be in contact with her new foster. I also gave the bed to this shelter that I just became aware of. I also promised that I would be back with linens from our friend, Jo , who is alway dredging up fine linens for our abandoned and abused. I will be reporting more~diana
Share