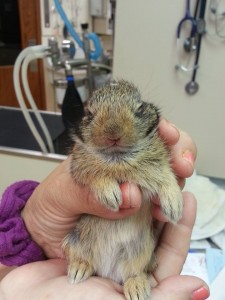 7/13/14 – After a beautiful Michigan Sunday, we wanted to share a feel-good story with our friends. Although our mission is focused to help companion animals, there are always those occasions when we just have to do what is right. Here’s Gina’s story ~ diana

“A lady brought this bunny into the Animal Urgent and Critical Care Center after she accidentally ran him over with her lawn mower. She was very upset and clearly concerned. Dr. Matt Cappitanio was up for the challenge and he decided to try and save the baby bunny. The before picture was just too graphic, but here he is waking up from surgery and there is a photo of Matt fixing the huge laceration which was exposing only flesh and muscle on the back.. The panicked woman waited in the lobby until the surgery was done. She was so worried, we allowed her to bring the bunny back to the nest in her yard because it only made sense to release him where he would be safe and familiar. When I handed her the bunny she said what do I owe? I said “4 paws 1heart” pays for this kind of emergency and we are willing to pay for what the bunny needed. She was very grateful. I called her a week later to follow up. She let the bunny get stronger before releasing him. She was feeding him (even went grocery shopping) and offering him kitten formula for additional hydration. When we spoke he was getting strong enough to be released back into her yard but she was taking baby steps at doing so. A huge thank you to the doctor for going “above and beyond” for this extremely tiny little bunny. We are very fortunate to have amazing doctors and neighbors who have compassion.~ Gina