7/1/14 – Here is another case of cruel, evil, heartless people. A 2-year old Maltese was brought into the vet hospital because he was having seizures. The family did not want to deal with him anymore and had no interest in what kind of treatment would be recommended for a dog having seizures. They simply said that they didn’t want him anymore and we could have him. He was signed over to 4p1h. We discovered that he had sores on his knees and the tops of both of his back feet. His entire belly was stained bright yellow, so the sores are believed to be from laying in his own urine — urine scald. We put him on seizure medication and he hasn’t had one since. It is in 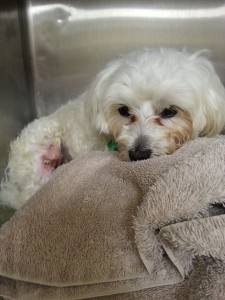 expensive to care for a dog having seizures and 4 paws 1 heart decided he did not deserve to die just because he has a condition. I’m hoping that we can find the perfect home for him where he will get the love he deserves. If you can help please, e-mail me at gina.4paws1heart@gmail.com