Skip to primary content
10/14/14 Where does such cruelty come from? We have had far too many cases of cats who were once loving pets being thrown outside. Where is the humanity?~ diana
“This is Snowball! Snowball is a very special cat, requiring a very special home Snowball was left behind when his irresponsible owners moved, left outside to fend for himself. If that is not traumatic enough, Snowball is DEAF! On top of that when he went in today for his neuter & shots they found he was FIV positive. FIV is most certainly not a death sentence, and most live long happy lives. It is not contagious, you cant get it, your dog cant get it. It can only be transmitted through a deep bite wound to another cat. I believe that Snowball was probably attacked by another cat that had fiv. Snowball is extremely loving & gentle. You don’t have to hear to give & receive love. Thank you 4 Paws 1 Heart for once again taking care of the vetting for another innocent life!”
Update:  10/23/14 Poor Snowball had an abs 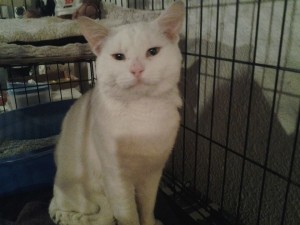 cess that wasn’t visible until it burst.  Once again, 4 Paws 1 Heart stepped up for him.  Gina cleaned the wound and the doctors provided medication for the infection.  He acts like a different cat.  He was obviously in pain unbeknownst to everyone.
Share