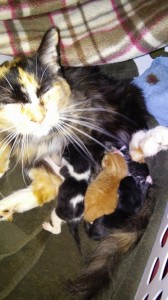 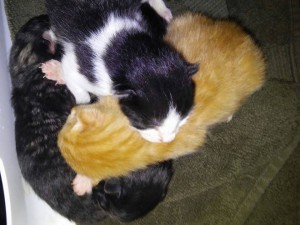 3/3/15 – Happy Lunch Hour!  For those of you who have been following the rescue of the 33 cats taken from a home in Warren — On that first day, 3 kittens were rescued. A few days later 3 moms and 11 kittens, 1 female, 1 pregnant female, and two males were rescued. On the next trip, another 11 cats were rescued. Throughout this period, Melanie kept looking for another pregnant cat that the owner said was there. Thankfully, Sunday night, March 1, the pregnant calico was rescued along with another cat; and, guess what, she gave birth last night. God Bless Melanie for being there for the mom, getting the babies out and cutting the umbilical cords when the momma couldn’t. I said a little prayer of thanks after Mel called me to give me the news. This sweet female was just a little over 24 hours from giving birth when she was finally rescued. Had she not been rescued Sunday night, God only knows what would have happened to her and her kittens. Mom had 4 babies. ~ diana