7/27/15 – Daisy is going to need all of our help — donations and prayers. I will be calling an eye specialist this morning in hopes of getting her an emergency appointment to be seen by an opthamologist who will probably have to remove her eye. Here is her story:

Patricia Brown received a call about two very young kittens (Daisy and Bo) not being taken care of by their feral mother. The caller told Patrica that Daisy was in very bad shape, her eyes had green discharge pouring out of them and she was infested with fleas and severely malnourished and dehydrated. When Patricia was able to get them she honestly thought that Daisy wouldn’t make it. With funds provided by 4 Paws 1 Heart, Daisy and Bo were taken immediately to the veterinary and were given antibiotics and medicated eye drops; Daisy was given some fluids to give her a boost in that she was much less healthy than her sibling. They are around 3 weeks old and Daisy only weighs 12 oz, Bo is a little bigger than her.

Upon arriving home Patricia had to give them both a flea bath all the while not expecting Daisy to make it through; but, she turned out to be a little fighter. She was given just small drops of formula to get some nourishment in her and had to be watched to make sure she swallowed it, as she didn’t even attempt to suck on it. On her second feeding, she actually started to take it, although she struggled. By her third feeding she was willingly sucking the milk and after a short while she starting nibbling on fingers, so Patricia got her some pate’ on a spoon and the little sweetheart sucked up two teaspoons on the spot! At that point, Patricia prayed that she had a survivor.

Three days later, Daisy’s left eye was not healing up like her right eye was and Patricia noticed it was very swollen and now turning white. Daisy was returned to the veterinarian who advised that her eye is so badly ulcerated that it has to be removed but because she is so small, she will need a specialist.

Daisy is doing well as far as eating and has used the litter box. ~ diana 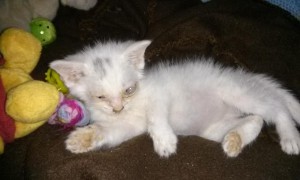 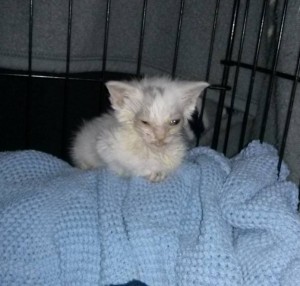