10/19/15 – Roseville, MI – We don’t know much about her or him. What we do know is that I received an e-mail from a caring apartment manager. She told me that there was a cat left in an apartment when the 70+ owner died. It turns out that this woman was dead for 10 days in her home with this baby before anyone discovered her. And, even then, no one saved the cat. The apartment manager had no idea until a work crew was in the apartment making repairs and when they opened a cabinet the cat flew out — this was 2 WEEKS after the woman’s body was found!! When the manager contacted us she said that a cat was stuck in a hole under a sink and although she put out food and water, the cat wasn’t eating. Again, what do you do???? We are not a rescue!! But could anyone leave this poor cat in the condition it was in? I contacted Chance’s mom, Denise, and our best trapper in the world, Debra Berolotti. They contacted the manager and checked out the situation. It appeared the poor cat was stuck. With some tools borrowed from the maintenance people and our other ‘village’ friend, Kurt, the hole was made bigger and Debra was able to get her/him out of the hole. He/She is very frightened and thin; the paw appears to be injured. We have no idea how old he/she is but Debra has dropped this baby off to be seen at the emergency. What a horrible experience for this sweetheart to go through. NOW what we need is for someone to give her a forever home. After Gina sees this baby we will provide more information and then I hope that one of our many friends will choose to give her/him a loving home. More to come later. ~ diana 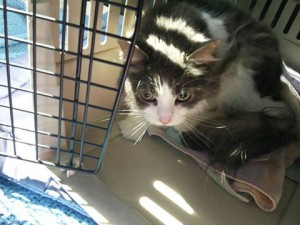