9/28/15 – Meet Buddy Morley. He was rescued by a caring family after he had been hit by a car. Several different attempts were made to find his owner without success. The local sheriff was going to have him put down. Instead, the family took him to an emergency vet and asked if we could help. Although donations have been slower than I can ever remember, we said YES so that Buddy Morley could be released today to this family who will give him a forever, loving home. ~ diana 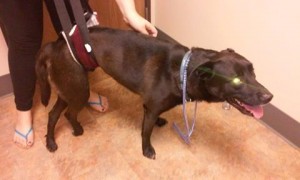