9/30/15 – Last night was a very difficult night for the 4 Paws 1 Heart Family. I received a call last night that the little kitten who was found trying to cross Metropolitan Parkway, Harrison Twp., MI was bleeding from the mouth. When he was vetted a cyst was found in his mouth and it was going to be checked when he went in for his neutering. Well it turns out that little Spencer had so much more going on that we never knew about. He was brought into emergency and a large mass was found in his abdomen. It turned out that the kitten had been having other symptoms so he was kept over for exploratory surgery. Spencer had a large huge lymph node that was enlarged due to either lymphoma or FIP. The doctors recommended that Spencer be humanely euthanized. RIP Little Guy — it sounds so trite but at least you did not die suffering on the street. ~ diana 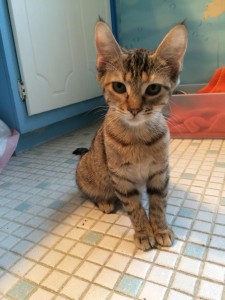