10/30/15 – Magic!! When we say it takes a village, Magic’s story is the perfect example. It was early Spring, 2015 when I received a phone call from a person who we’ve assisted before in the Bad Axe, MI area She had just rescued a kitten who was trying to get someone’s attention in the doorway of a Taco Bell. The poor little guy had an obvious problem with his leg and was dragging it. I told the rescuer that 4 Paws 1 Heart could definitely start the process by getting him into a vet to be assessed and that I would see if we could find a rescue to take him in. That is when Kelly, of Friends of Heavenly Paws of Michigan stepped up and agreed to take Magic into their rescue and we committed to Magic’s medical bills. We had Magic assessed by a couple of veterinarians who both agreed that Magic’s leg should be amputated. But this sweet little guy is a fighter (like A Second Chance For Chance) and we all agreed to have him seen by Dr. Kern of Pawsitive Steps Rehabilitation & Therapy for Pets. Dr. Kern felt strongly that Magic had the catitude to go through therapy and that his leg could be saved. 4 Paws 1 Heart has been paying for Magic’s therapy sessions since and just recently Heavenly Paws and 4p1h decided to share the cost of an orthopedic device recommended by Dr. Kern. Everyone agrees that Magic is one special boy who definitely deserved that second chance in life. ~ diana 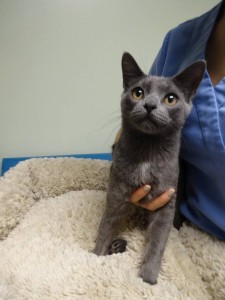 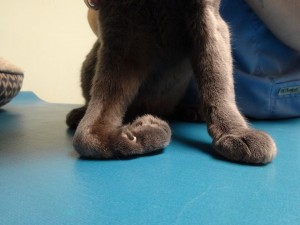 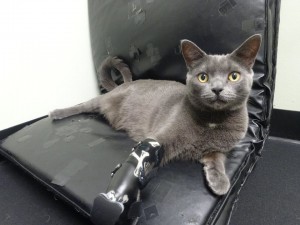